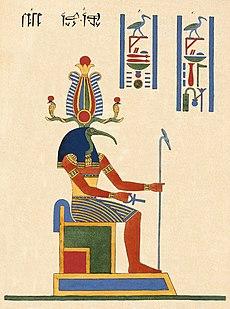 The Discourse on the Eighth and Ninth is the sixth tractate of Codex VI which gives specific instructions on how to reach ‘spiritual perfection’.

It is in the form of a dialogue between a “father”, sometimes called Hermes Trismegistus (a legendary figure combining the Greek god Hermes and the Egyptian god Thoth) and a student referred to as his “son” or “my child.”

The Discourse opens with the student reminding his master of a promise,

“My father, yesterday you promised you would take my mind to the eighth stage and after that you would take me to the ninth. You said this is the sequence of the tradition.”

The student has already progressed through the first seven levels of understanding but admits he has had no experience of the divine, which cannot be reached through studying books.

“Father, I understand nothing else than the beauty I have experienced in the books.”

This involves an initiation into the divine mysteries of the Eighth and the Ninth heavenly spheres, so that he may be born again and be directly inspired by God’s mind.

The two join in prayer to “the invisible God to whom one speaks in silence”.

The prayer moves into a chant of sacred words and vowels:-

These letters are from the ancient Greek alphabet: an accent above a vowel makes it a ‘long’ sound eg O as in Om

The teacher prays, “Lord.. acknowledge the spirit that is in us” and enters an ecstatic state,

“I see, I see ineffable depths. How shall I tell you, my child! How shall I tell you about the universe? I am mind (nous) and I see another mind, one that moves the soul. I see the one that moves me from pure forgetfulness. You give me power. I see myself. I wish to speak. Fear seizes me. I have found the beginning of power above all powers, without beginning.. I am mind. I have seen. Language cannot reveal this. For all on the eighth, my child, and the souls in it, and the angels, sing a hymn in silence. I mind, understand.”

Watching, the student himself is filled with ecstasy:

“I am happy, father, to see you smiling. The universe is happy.”

Seeing his teacher embodying the divine, the student pleads with him,

“Trismegistus, do not let my soul be deprived of the vision. O divine being, everything is possible for you as master of the universe.”

The master tells him to sing in silence, and to “ask what you want in silence.”

“When he had finished praising, he called out, ‘Father Trismegistus! What shall I say? We have received this light. And I myself see the same vision in you. I see the eighth, and the souls in it, and the angels singing a hymn to the ninth and its powers… I pray to the end of the universe and the beginning of the beginning, to the goal of the human quest, the immortal discovery…I am the instrument of your spirit, mind is your plectrum, and your guidance makes music with me. I see myself. I have received power from you, for your love has reached us.”

After giving thanks to God for his favour, the Discourse closes as the master instructs the student to write his experiences in a book:

“My child, copy this book for the temple at Diospolis (Diospolis Magna, now Luxor), in hieroglyphic characters, and call it the ‘Eighth reveals the Ninth.’”

In order to “progress by stages and advance in the way of immortality” under the guidance of Hermes Trismegistus, the student must pass through an initiatory mystery, a rite of regeneration.

The key experience of this mystery is vision of oneself – “I see myself”.

Not only does this vision bring about the regeneration of the initiate, but it enables him to recognize the one initiating him – the figure of Hermes Trismegistus himself.

How can we achieve this?

With spiritual exercise and grace.

The main exercise is prayer. Prayer implores God’s assistance, and complements the meditative contemplation of the beauty of the soul that preceded the prayer. Those who pray become “a reflection of the Fullness (pleroma)”.

By praising the divinity, the student must first honour and unite with his siblings who live in this world, the congregation of Hermes’ spiritual offspring.

Eventually he also meets the souls and the angels of the eighth sphere as well as the power of the ninth one.

True prayer is a spiritual sacrifice to God uniting all of the souls and spirits in this world as well as in the highest heavens.

By silently praising God we become able to conceive ourselves as pure minds, released from our bodies and able to receive “the power that is light” or the Divine Mind itself.

The Discourse on the Eighth and Ninth concludes with a warning from Trismegistus:

“Copy an oath in the book, so that those who read the book may not use the wording for evil purposes or to subvert fate. Rather, they should submit to the law of God, and in purity ask God for wisdom and knowledge (gnosis). Whoever is not begotten by God will not be able to read what is written in the book, even though the person’s conscience is pure. Such a person progresses by stages and advances in the way of immortality..”

The following penultimate tractate from Codex VI, The Prayer of Thanksgiving, sums up in lyrical form the successive steps of the Hermetic ascent to immortality, and would follow the last stage of initiation described in the Discourse on the Eighth and Ninth.

After the prayer, the newly born again child of Hermes Trismegistus would take part in the community ritual of a banquet,

“When they prayed and said these things, they embraced, and went to eat their sacred bloodless (vegetarian) food.

Scholars agree this text was originally written in Greek in Egypt.

As I said in an earlier post, as part of codex VI, the Discourse on the Eighth and Ninth and The Prayer of Thanksgiving were written by Anne, daughter of Sarah and granddaughter of Mary Magdalene, at the end of the 1st century at Lake Mareotis, Alexandria.

The Discourse on the Eighth and Ninth and the Prayer of Thanksgiving give us a rare insight into the initiation ceremonies that took place in these communities.    These would not have been possible without communities such as Lake Mareotis – the mystery school teachings would have been passed down orally through the female line.